Simon Landrein is an artist and illustrator who we have admired for quite a while. When the opportunity came up for him to do an Element board series, we had to hit him up. As a skater growing up in the sticks of northwestern France, Simon forged his own path with his friends to find ways to skate and the same can be said for his signature style of illustrations.

Born in 1984, Simon has chased his interests from Brittany to London and eventually settling in the French Basque Country. Being a very humble guy by nature, he recently simplified his illustration work becoming more naive and narrative in style. Through his efforts, he has created a fun niche for himself and his art.

He is currently splitting his time between directing commercials and creating illustrations for some of the world’s leading publications. Having been featured in The New Yorker, Wired, Paulette, The New York Times and with Fool’s Gold Records it can be said that Simon’s cheeky illustrations of odd characters and landscapes have certainly made the rounds over the past several years. We are thrilled to have been able to collaborate with him on this series of pro boards.

To go along with this interview, Simon has put together a playlist of some of his favorite tunes of the moment for you to enjoy. To explore more of Simon’s work, visit his site at https://www.simonlandrein.com/ 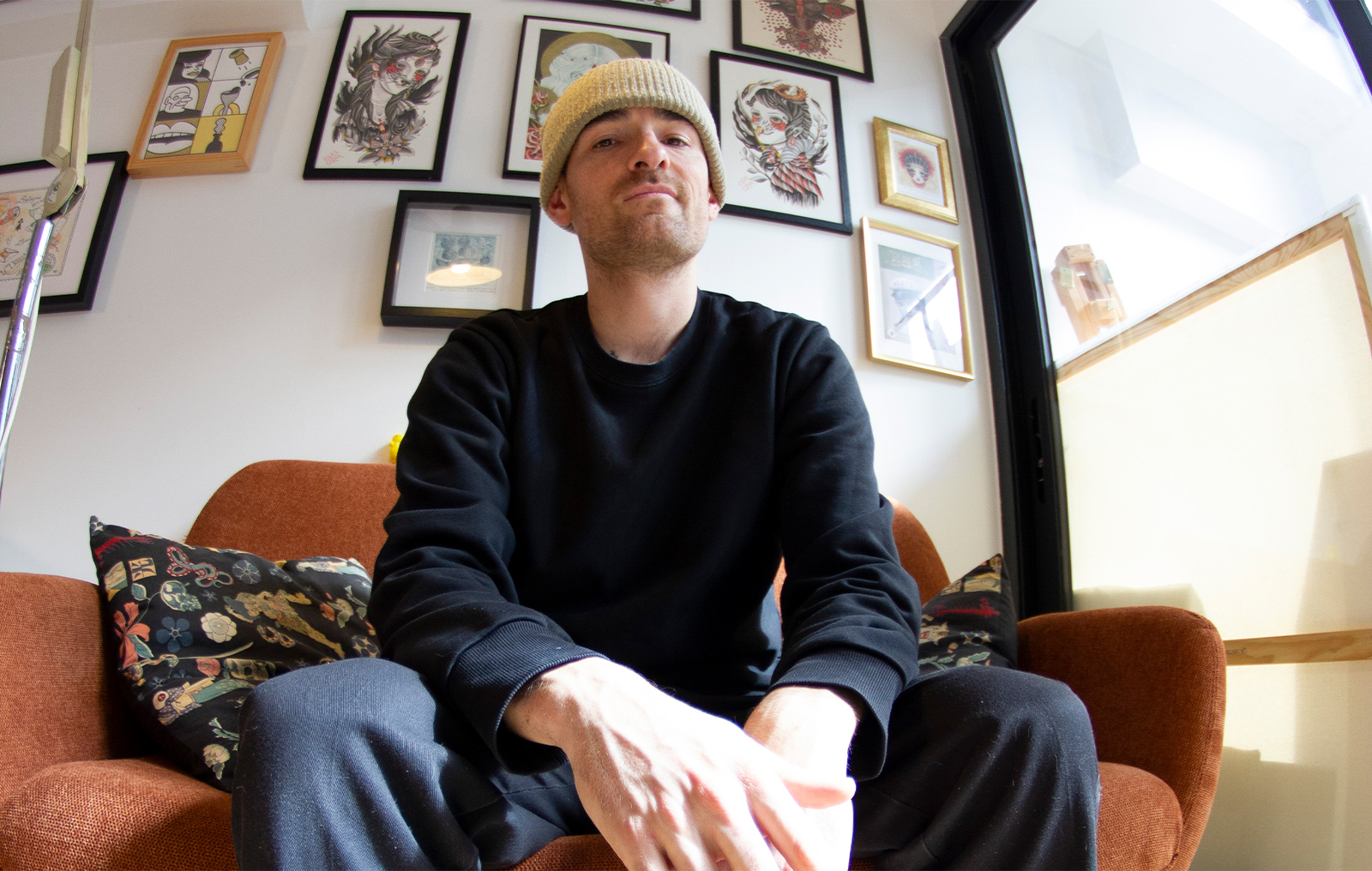 Hi Simon, how are you? Where are you speaking to us from now?

I'm doing very well, thank you. I am at our studio in Bayonne in the southwest of France. A bunch of guys made an office/studio here and I have my little space within it.

Explain us how you got into skateboarding and art. Did you grow up in and around both of those things? How did you find your path?

Well, how I fell into skateboarding was that we had a square in my hometown that had a bunch of curbs and features. Some local skaters were always around. It was in the 90s when I was about 16 years old and my family wound up moving near that main square in town. We didn't have any Internet at that point in time, so I just went out there and became friends with all of the local skaters and started skating with them.

Like I said, it was the end of the 90s so there weren't very many of us but the scene was pretty active. We would get into our cars and drive tons and ton of kilometres to go find shitty skate parks in the area to switch it up from our normal scene in the square. I can imagine that there are a lot of skaters from the countryside out there that understand this scenario and grew up skating in the same way. I always skated growing up and still skate, but I have always been the guy who gets hurt and winds up filming a bit ha ha.

But the filming definitely influenced me even though I wasn't very good at it. After that period I went up moving to Rennes for my studies. It's in the same region I grew up in, but it is a much bigger city.

Explain us how you went from studying cinema in school to getting into more visual art and design.

What we were studying in school was very theoretical. Stuff like New-Wave cinema from Argentina in the 1970s. It was super interesting, but very theoretical and hard to find a career in. Basically I needed to find a side job where I could make some money in something that I was interested in. So I needed to find some area of study that could allow me to become a bit more professional.

Eventually I wound up finding a school that specialized in 3-D animation in the far north of France in a place called Valenciennes. So I did my work there, passed the course, got my diploma and immediately I found work in London. I started working in the studios straight away doing 3-D animation and design. This is how I met a guy who is now a good friend and colleague called “McBess”. He is quite well known. He was the one who reoriented me in the direction of pure design. Just like with my skating, I was not bad in 3-D animation but I was better in design and production. 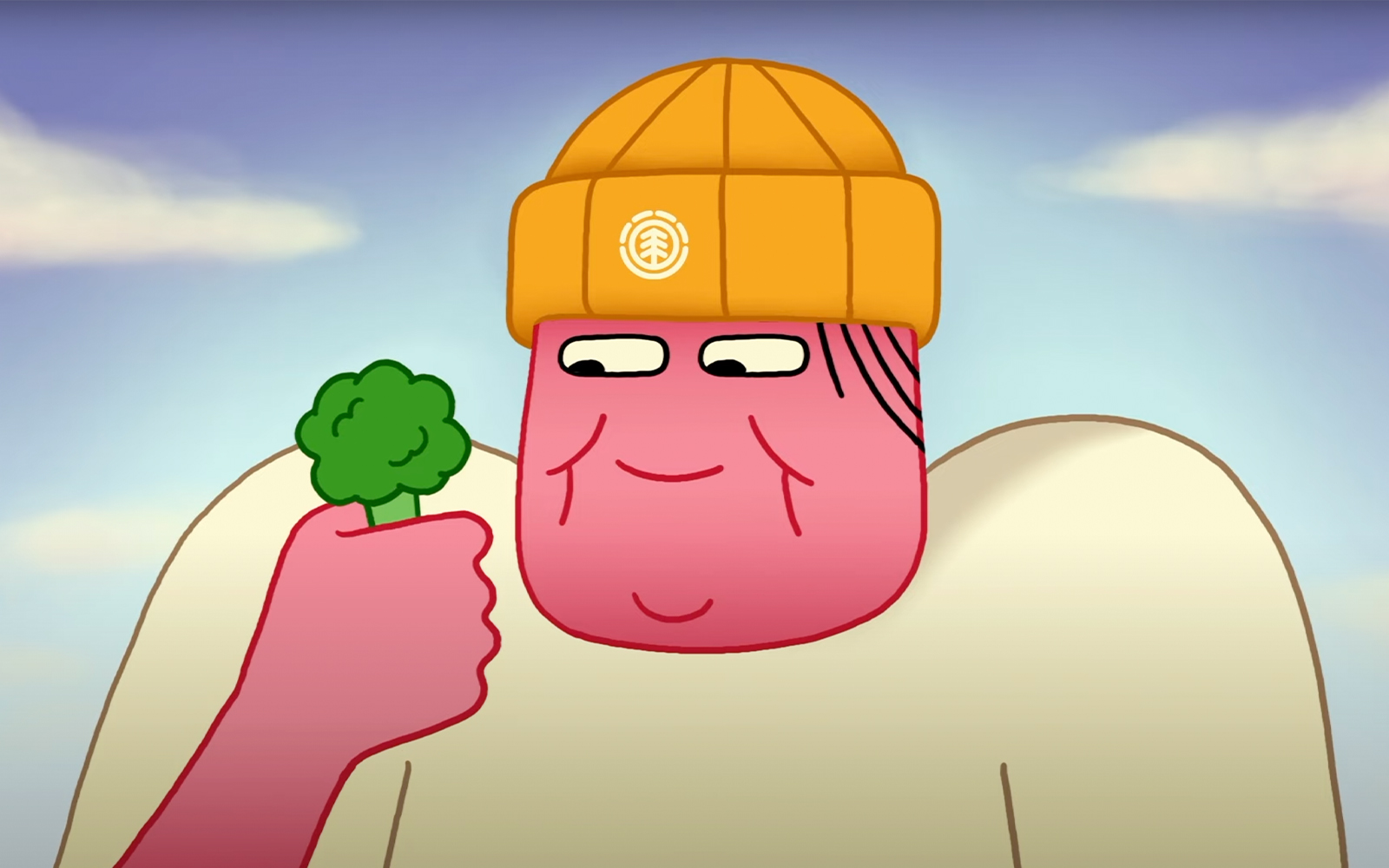 Just for a reference, what year was that in?

That was in the 2007 period and immediately lots of studios and agencies started hiring me for work in preproduction to get a bit of experience. That's how I eventually started to find a style that I was able to express myself with and a style that I liked. I was working a bit in the studio at the same time and I was scoring some work with magazines while continuing to develop my own style. So for a few years I was working in the jungle you would say, mixing my own work with commercial stuff that was helping to pay the bills, doing a fair amount of illustration work. Then from that period, my work started growing to the point where there is what I do full time.

So when you were in the process of starting your own art career as a full time gig, what type of work were you undertaking to help supplement your income and livelihood?

I was doing quite a bit of advertisement work, with “McBess" we did quite a lot of work together for certain clients especially doing postproduction work. We were really some of the only guys doing illustration and animation in that area, so people kept us in mind for certain jobs. It was tiring, but we were a bit lucky in that respect. Eventually we started doing a lot of animation work for Passion Pictures in London who are very well known. I still do some work for them which is great, so we get to go out their offices in London from time to time. It definitely took some time for my career to develop and I was juggling a lot of jobs. It was from 2013 to 2014 that things really started to take off and I still don't really know why. But that's how it has worked out which is really cool. 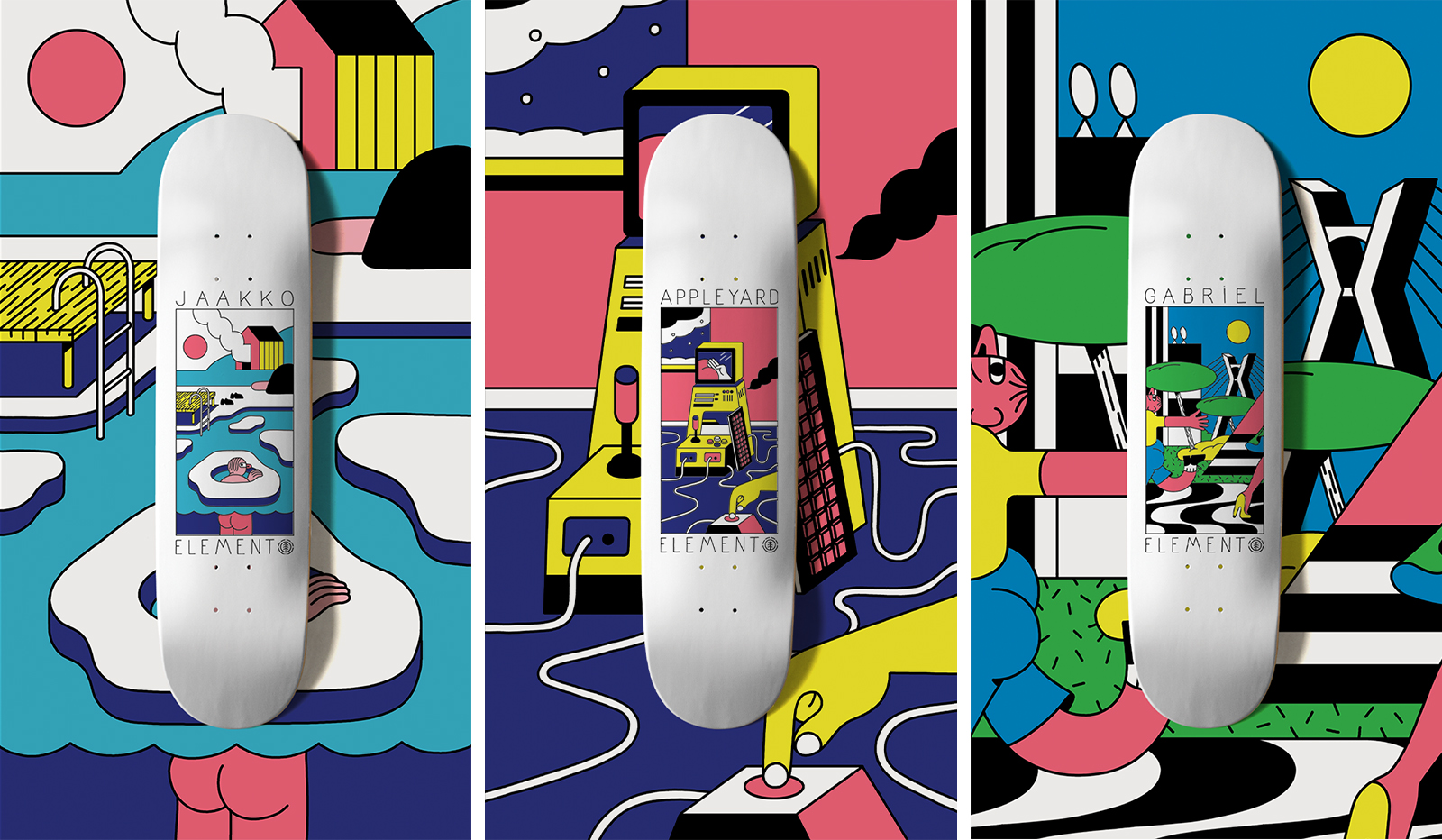 How did this project with Element come about for you to create some pro model graphics for the likes of Jakko Ojanen, Gabriel Fortunato and Mark Appleyard?

Initially, when I got in contact with Element, we talked about one board graphic for Jakko which I was hyped on! The whole concept was to come up with a character in an environment that represented Jakko and his lifestyle bit. Then the idea expanded to include two other skaters to have a triptych series which was awesome. So we wound up making graphics for Jakko, Gabriel and then Appleyard. I was a bit shocked, because I am a big fan of Appleyard. When I told my buddies I was doing a graphic for him everybody was like “oh damn, no way!” Haha. I grew up watching the first “Sorry” video, so it was crazy thinking about how I was watching that video when I was 16 years old and it seems like that world was a bit untouchable. It's pretty funny and cool that I wound up being able to make a graphic for him.

How would you explain your artistic style and how did you develop it?

At the time it was because I was working on an animation for a client that wasn't very exciting, something regarding finance etc. It was a bit last minute and I was in the studio when they wanted something with a little character guy or “bonhomme” in the animation. Since I had to do it so quickly it was done in a pretty naive style. Honestly I thought it was pretty shitty ha ha.

But it made me smile because it was so shitty that I actually quite liked it a lot. So it was sort of by accident that I made this animation of at the beginning of this trend or a wave of graphic style that was all based around really naive, simple and kind of sketchy characters. I wound up using this style for some professional gigs and I wound up getting a bunch of work, because of this happy accident. It all started working out right away. I then started making little series or strips with these types of illustrations and they just took off.

Some of my friends have asked me, “well how did you do that?” Honestly I really didn't do that much. I just started posting my work to get it out there and it literally started catching on right away. So much so, that the first client that called me to do this type of character illustration was The New Yorker magazine. It's something I never could've imagined as an illustrator, like you start out immediately getting work from The New Yorker. Then you start and then it just takes off from there. It was a bit of a chain reaction and sort of just by chance.

It may sound a bit funny, but I get paid to draw, to design characters of little guys or “bonhommes”. When I speak with friends of mine who have proper hard jobs like carpenters or plumbers where they are actually building things, I realise that I have it pretty nice being able to sit in front of my computer drawing things. I work hard on all of things I do, but I have a lot of freedom you know? I am really happy with where I am at in this moment. For now [laugh].